Pumpkin pie who? These mini pumpkin whoopie pies combine the perfect hint of cozy fall spices with a sweet maple buttercream to make the cutest bite sized dessert. Chock full of delicious pumpkin flavor, easy to make, and fun to eat, you’ll fall in love with these mini sandwich cakes. 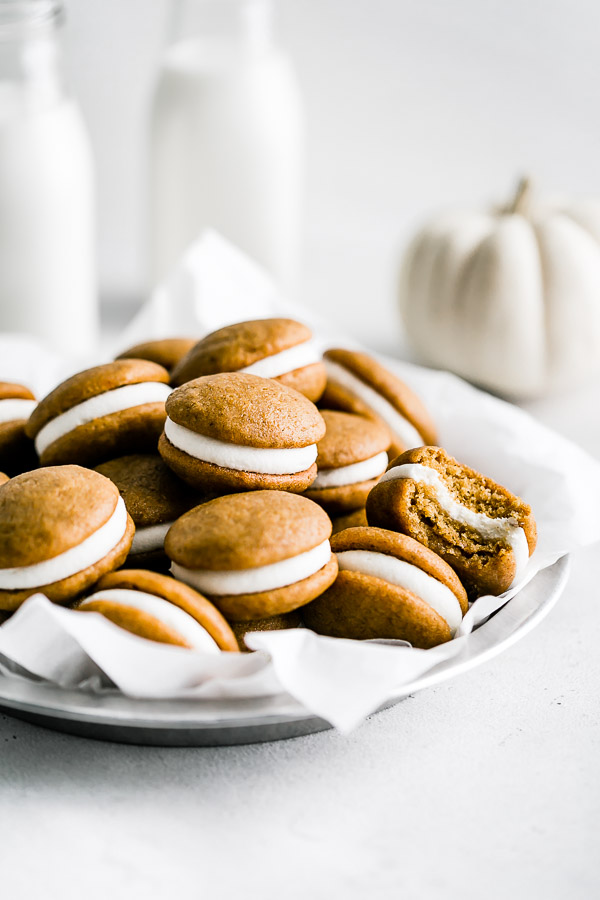 Here’s the thing. I don’t really like pumpkin pie. I get the feeling that more people like the idea of pumpkin pie more than the actual pie itself. For me, it’s more about the texture than it is about the flavor. Plus I’m just not a fan of the whole pie making process. You’ve got to mix the dough, roll the dough, fill the dough and all that jazz. But can we talk about pumpkin WHOOPIE pie?? That I can do. These light and pillowy soft pumpkin spiked whoopie pies are the ultimate Fall dessert the whole family will love. They’re super soft and perfectly moist. Sweet, but not too sweet. They bake up in just minutes and make the perfect finale to a casual weeknight dinner in or a festive dessert for your holiday buffet. Prepare to be wowed pumpkin lover’s…these mini hand held treats are going to be your new favorite. 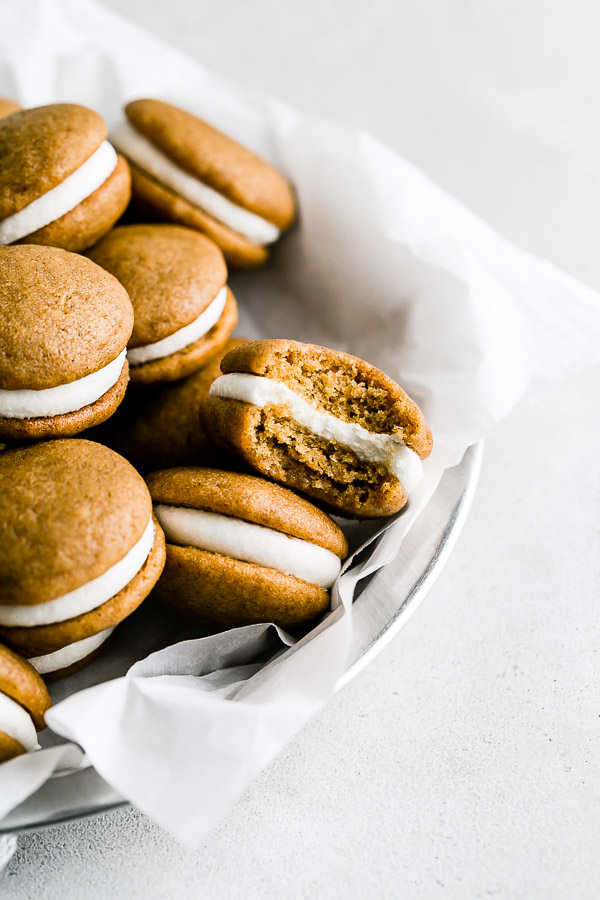 WHAT EXACTLY IS A WHOOPIE PIE?

Some say that whoopie pies are part cookie, part cake. If we’re being technical, they are actually more like an inside out cupcake with the cake on the outside and a dollop or swirl of frosting on the inside. Whoopie pies resemble a sandwich cookie {oh how I love a sandwich cookie!} but have the consistency of cake. So I think it’s safe to say that whoopie pies are the best of both worlds. The quintessential whoopie pie is a beloved baked good said to have originated in the Northeast and states like Pennsylvania and Maine lay claim to having invented this classic dessert. All I know is that they are downright delicious. If you haven’t had a whoopie pie before, you’re in for a real treat! 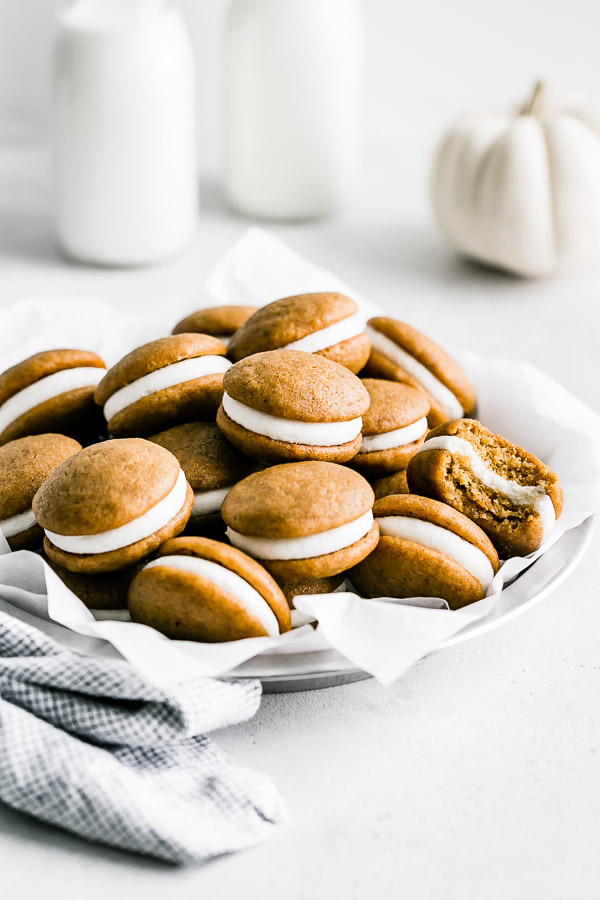 Get your hands on some canned pumpkin bakers and double check your pantry for the ingredients listed below. These mini pumpkin whoopie pies come together in no time with a just a handful of baking staples and a sprinkling of warm fall spices. 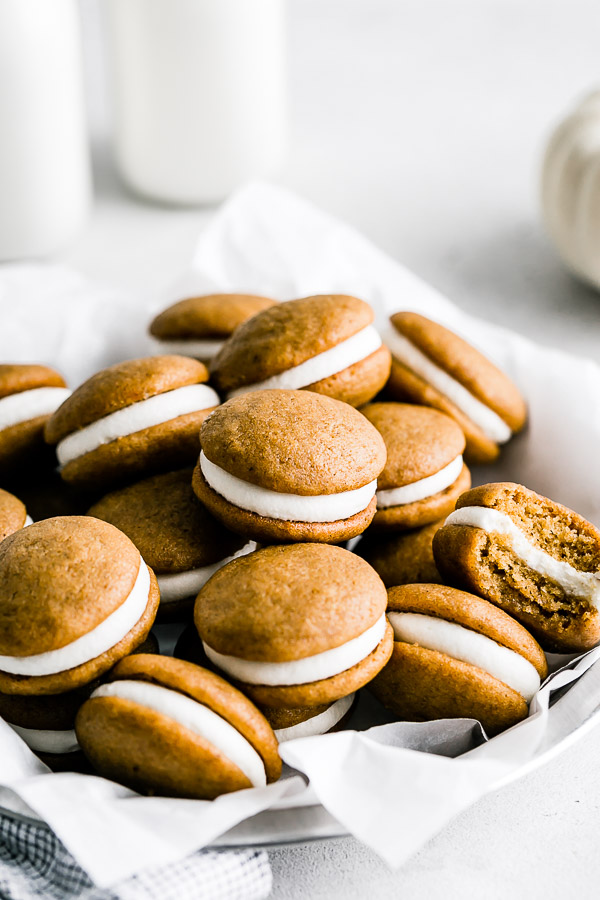 Use chilled pumpkin. For best results, place a can of pure pumpkin puree in the refrigerator at least an hour before mixing the batter. I use Libby’s 100% Pure Pumpkin for this recipe.
Don’t skimp on the spices. I promise these whoopie pies are perfectly pumpkin-y with just the right amount of cozy fall flavor.
Do not over mix. These whoopie pies are basically cake which means you want to avoid over mixing the batter. Keep the stirring to a minimum once you add the flour and they’ll rise up light and pillowy soft.
Pipe the batter and smooth before baking. For the prettiest pies I highly recommend piping the batter onto the cookie sheets rather than scooping it. If you don’t have a piping tip or bag handy, not to worry. Simply place the batter in a large ziplock bag and cut one corner off to pipe the batter. Then to smooth the tops, dampen your finger with a bit of water and gently brush over any lumps and bumps on top. Once baked, the tops will be smooth and shiny.
Do not over bake. One of the reasons I love these mini whoopie pies so much is that the texture is super light and fluffy. To keep the cakes soft and tender, don’t leave them in the oven too long. Once a toothpick inserted in the center of the cake comes out clean or with just a few crumbs remaining, immediately remove the cookie sheet from the oven and allow the pies to cool.
Cool completely before filling. Waiting to fill these whoopie pies with the maple cream cheese frosting is hard to do, but I promise you it’s well worth the wait. Do not attempt to frost the pies until they are completely cool to the touch or assembling these minis will be a very messy endeavor.
Chill the assembled pies before serving. Ok, I’m not gonna lie. I ate like three of these before they even made it to the fridge but can you blame me?? They’re positively irresistible! But, take it from me, these pumpkin whoopie pies are seriously scrumptious eaten straight from the fridge once the frosting has a chance to set. About 30-45 minutes of chill time should do the trick. 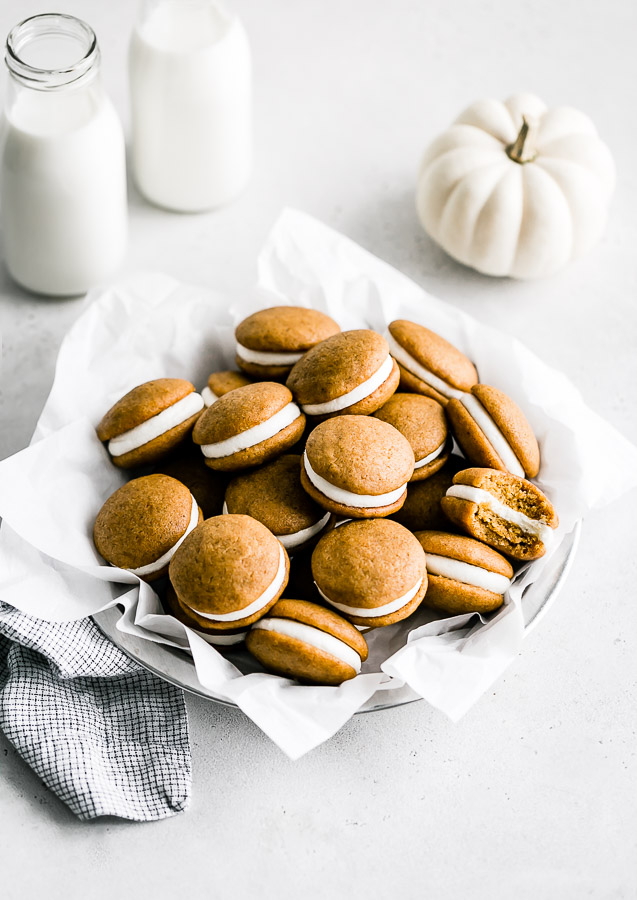 HOW TO FILL PUMPKIN WHOOPIE PIES

These cute as can be mini pumpkin whoopie pies are made extra delicious with a maple cream cheese filling that you’re going to want to smother on everything that comes out of your oven. The frosting is sweet, but not overly sweet and it pairs perfectly with the warm pumpkin spices in the cake. For best results, chill the frosting for 10-15 minutes before assembling the whoopie pies. Trust me, it will make your life much easier if the frosting isn’t too soft. You can pipe a dollop of the maple cream cheese frosting onto the mini cakes, or if you’re feeling fancy, use a star tip to create a pretty swirl. It’s worth noting that using a spoon or spatula to scoop the frosting onto the cakes is 100% acceptable too. The choice is yours. Speaking of choices…if you’re feeling frisky you could sub the maple syrup for one tablespoon of good quality bourbon for a boozy version of these bite size goodies. Now that’s a holiday dessert I can get behind! Once you’ve assembled your mini pumpkin whoopie pies, place them in the fridge to allow the frosting to set and smoosh into the cakes a bit. I suggest you enjoy a spoonful of frosting while you wait. 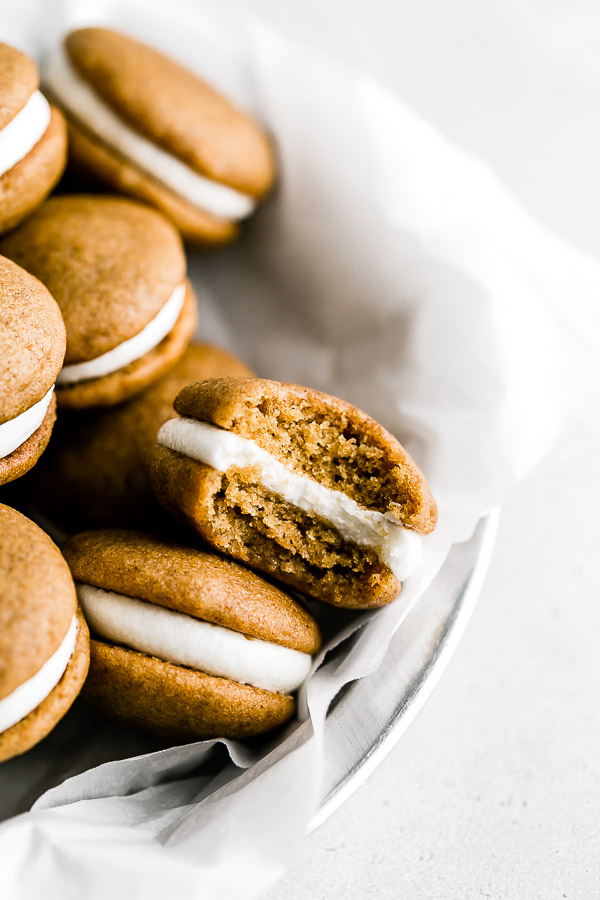 HOW TO STORE PUMPKIN WHOOPIE PIES 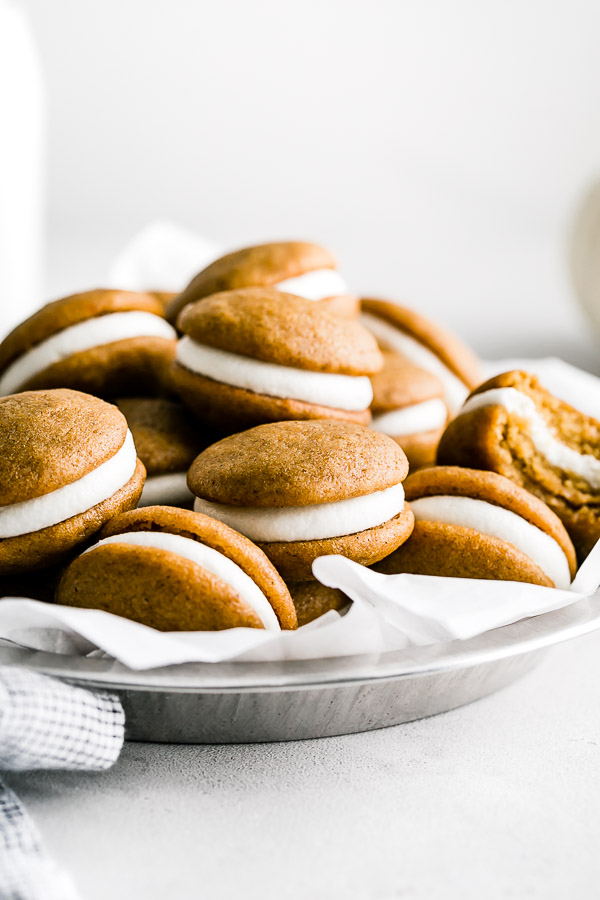 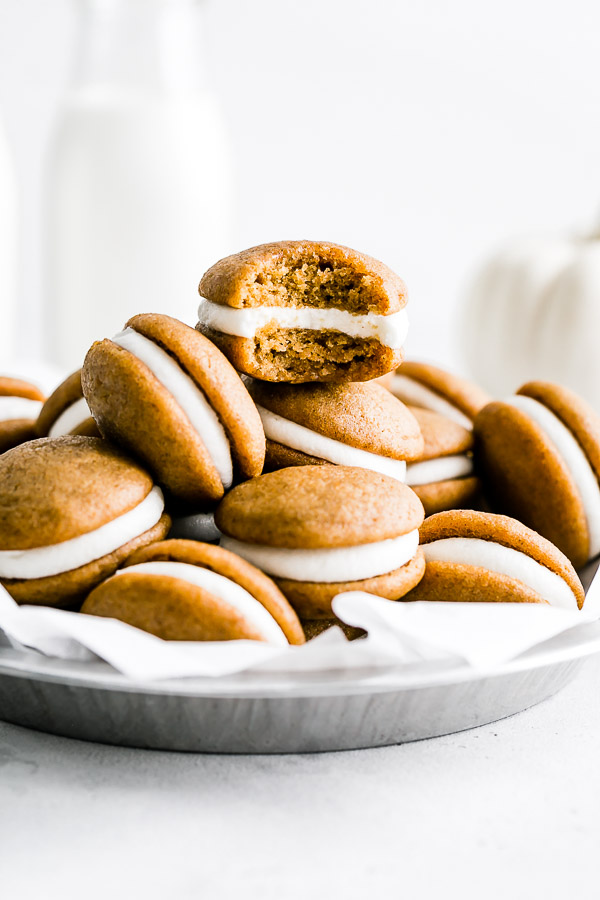 I hope you’ll enjoy a batch of these mini pumpkin whoopie pies this autumn and don’t forget to bookmark this recipe for the holidays. These mini desserts would make the perfect finale to your Thanksgiving feast.
Happy baking!
If you love these Mini Pumpkin Whoopie Pies, be sure to try these other Fall favorites…
Pumpkin Chocolate Swirl Muffins
Chocolate Dipped Brown Butter Pumpkin Madeleines
Easy Butterscotch Bundt Cake
The Ten Best Thanksgiving Desserts
Print

Pumpkin pie who? These mini pumpkin whoopie pies combine the perfect hint of cozy fall spices with a sweet maple buttercream to make the cutest bite sized dessert. Chock full of delicious pumpkin flavor, easy to make, and fun to eat, you’ll fall in love with these mini sandwich cakes.

1 15 ounce can pumpkin puree, chilled (do not use pumpkin pie filling)

Preheat oven to 350 degrees. Line two baking sheets with parchment paper or alternatively, place a silicone baking mat with a macaron template on each cookie sheet. Set aside.

In a medium bowl, whisk together flour, baking soda, baking powder, salt and spices. Sift together into another bowl and then sift once more. Set aside.

In the bowl of a stand mixer fitted with the whisk attachment, whisk together the oil and brown sugar on medium speed until well combined.

Add the pumpkin and vanilla and mix on medium low until well incorporated.

Add eggs, one at a time, mixing on medium low after each addition.

Add the sifted dry ingredients to the bowl with the wet ingredients and mix on low speed until incorporated. When a few streaks of flour remain, remove the bowl from the mixer and use a large spatula to fold together the batter with just one or two more turns of the bowl. Do not over mix.

Pipe the batter into 1 1/2 inch rounds on the parchment paper lined cookie sheets or use the macaron template as a guide. The batter will not spread much while baking but leave an inch between each whoopie pie.

Bake the whoopie pies for 10-12 minutes. Once fully baked, the pies should spring back when touched and a toothpick inserted in the center should come out clean. Do not over bake.

Remove the pan from the oven and place on a cooling rack for 10 minutes. Carefully remove the whoopie pies from the pan and transfer to a wire rack to cool completely before filling.

Place the softened butter and cream cheese in the bowl of a stand mixer fitted with the paddle attachment. Mix on medium high speed for 2 minutes.

Add the sifted confectioner’s sugar, 1/2 cup at a time, mixing on low speed until incorporated. Once all the sugar has been added, increase the speed to medium high and mix for two minutes until smooth. Scrape down the sides of the bowl as needed.

Add the maple syrup, starting with 2 tablespoons and adding a third tablespoon for more flavor if desired. Mix on medium high speed until incorporated.

Add the heavy whipping cream (or whole milk), vanilla and salt. Mix on medium high speed for one to two minutes or until smooth and creamy.

Place frosting in a large piping bag fitted with a large round tip. If frosting becomes too soft and warm, place it in the refrigerator for 10-15 minutes and then resume filling the whoopie pies.