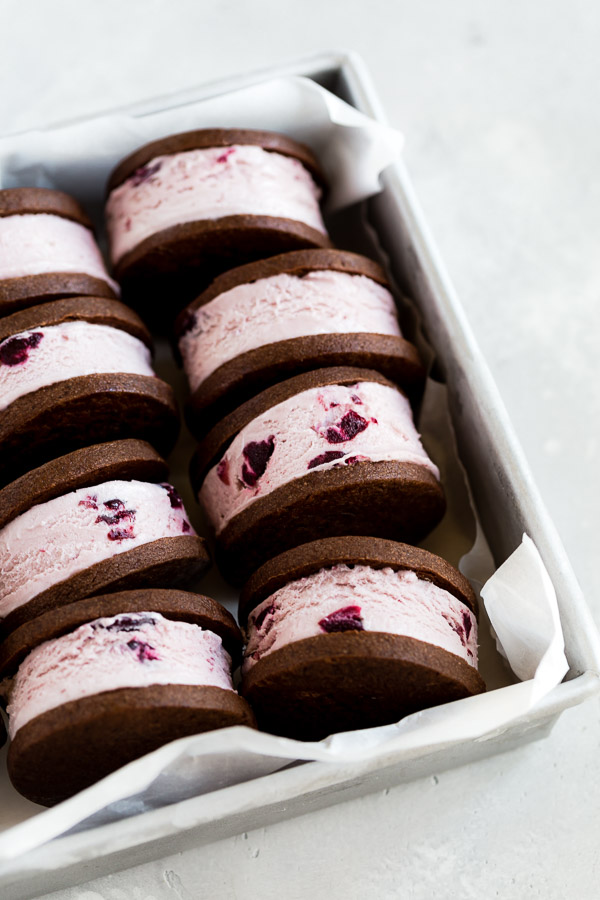 As I kid I remember going out for ice cream as a family on Friday nights in the summertime. We would drive my parent’s Volvo stationwagon to the other side of town after filling our bellies with too many tortilla chips at a hole in the wall Mexican food restaurant known for the best enchiladas in the county. I think they were also known for the best margaritas in all of Southern California which is probably another reason my parents liked to go there. Afterwards, my older sister and I would team up and beg for a scoop or two of our favorite ice cream from the place with the cutesy pink and blue logo. 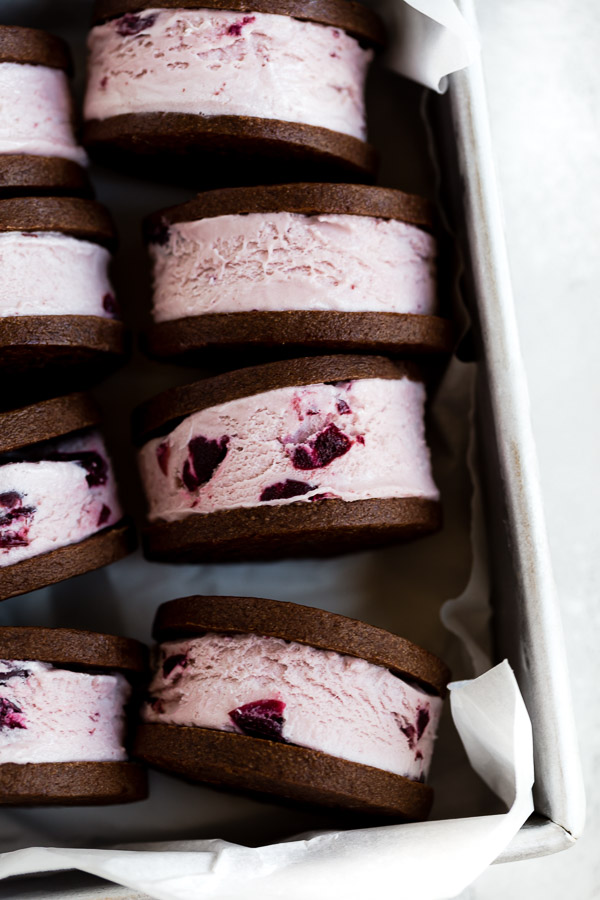 I would almost always order a single scoop of chocolate chip on a plain sugar cone. I was ever so predictable, rarely straying from my usual routine. If I did deviate it was only by an inch with a sideways swap for chocolate chip’s closest substitute…mint chip. But chocolate chip was my all time favorite and I’d crave it the minute that dinner was over. My Dad, being the most adventurous one in the family, would alternate between rum raisin (umm, ewwww) and cherries jubilee.
When I was eight, you couldn’t pay me a million dollars to try even a taster spoonful of either of those flavors. Just yuck. I mean, cheeries jubilee was pretty much the equivalent of cough syrup in my book. Gross. My young, far less experienced palate simply wouldn’t have it and I wanted nothing to do with any flavor outside of the usual kid-approved variations of chocolate and vanilla. 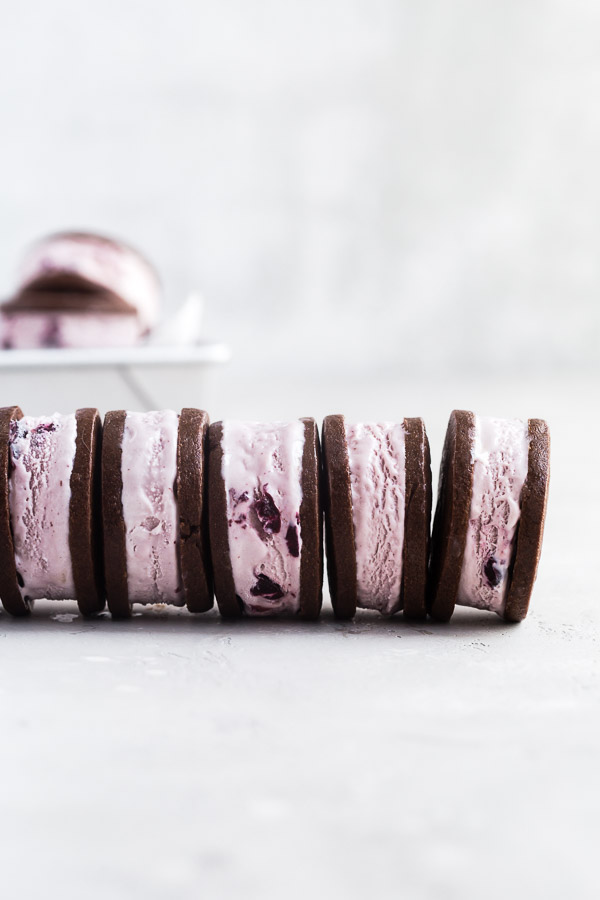 Flash forward thirty something years. If you had told me decades ago that I would be making cherry ice cream from scratch I would never have believed it. But here I am, forty-something and I just might be cherry ice cream’s number one fan. Who would have guessed? Still not on board with rum raisin anything because, well….raisins. It’s a hard no. Rum without the raisins? That’s a different story for another day.
This summer I’ve been crushing hard all things cherry. And since we still have lots of summering to do, it only seems appropriate that we celebrate with an extra special frozen treat. Cherries are refreshing and delicious all by themselves on a hot summer day. But stir up a handful of fresh dark cherries into a batch of creamy, homemade ice cream and you’ve got yourself the ultimate summer dessert. 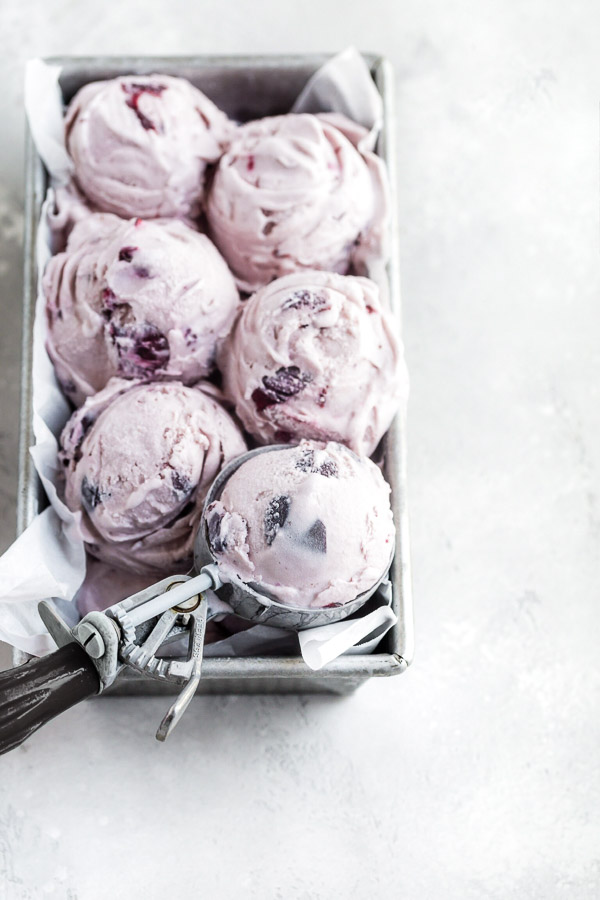 Cherry season doesn’t last forever so now is the time to live our best cherry life. If you’ve been following along on my Instagram, you know I’ve been doing just that. Check out my recipe for this Cherry Topped Cake with Raspberry Glaze. It’s a showstopper if there ever was one and this recipe is proof positive that cherries make the prettiest cake toppers ever. 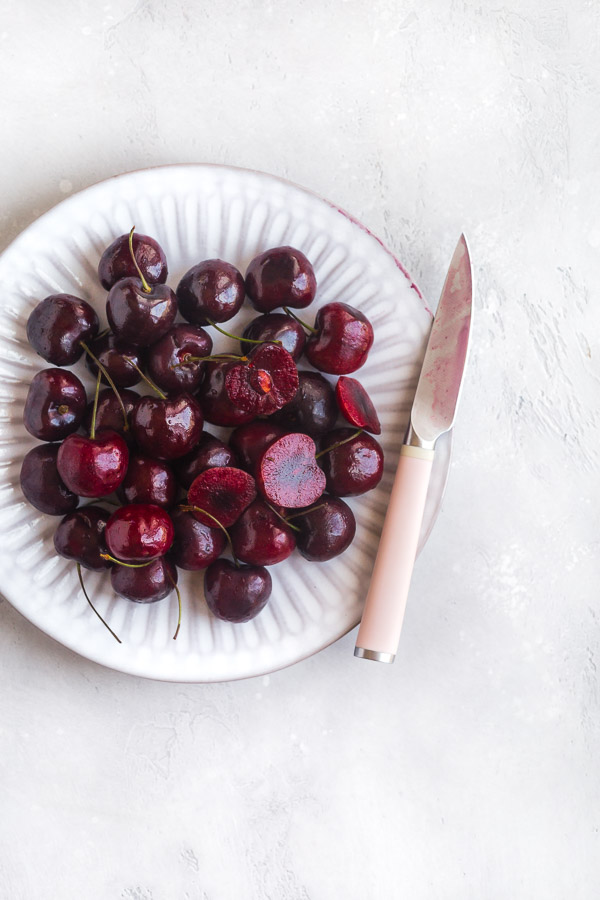 If you are new here to the blog, it’s worth pointing out we are celebrating all things summer with four new ice cream cookie sandwich treats. So far I’ve featured a Brookie Ice Cream Cookie Sandwich {oohhhmmgeeeee} and a seriously splurge worthy Chocolate Dipped Peanut Butter Ice Cream Cookie Sandwich. Both are out of this world and I hope you’ll add them to the menu for your next backyard bbq or neighborhood pool party. The cookies themselves belong on your must-bake list. But just add ice cream between two of these delectable cookies and these frozen sammies will make you lots of friends. Trust me. 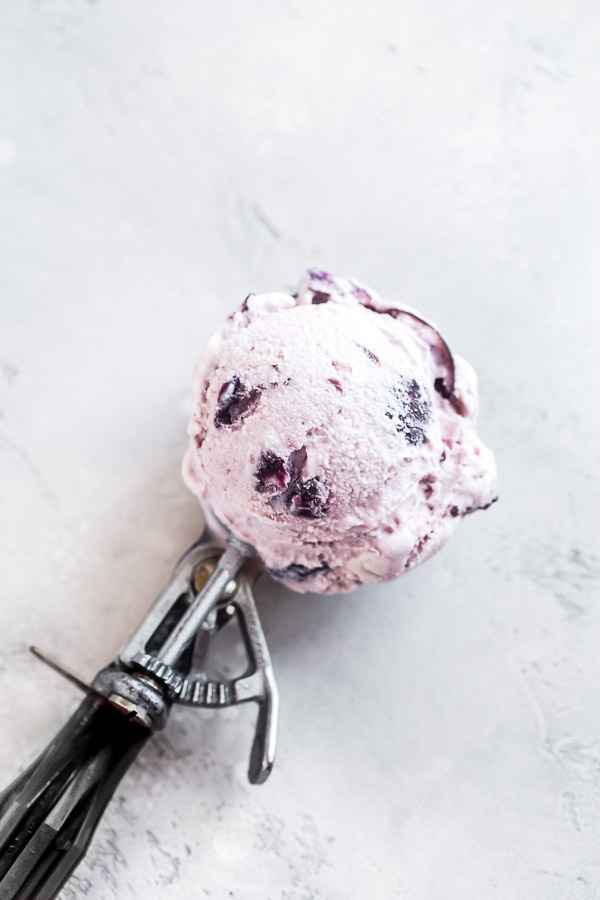 Today’s dark cherry ice cream sandwich is less about the cookie and more about the decadent, uber creamy ice cream. I’ve created a simple and tender chocolate cookie to sandwich a thick scoop of ultra creamy ice cream studded with fresh, dark cherries. They are a wee bit on the fussy side meaning that there are a few steps required to make these frozen wonders but you’ll be oh-so-glad you did.  The homemade ice cream really puts these frozen treats in a league of their own. 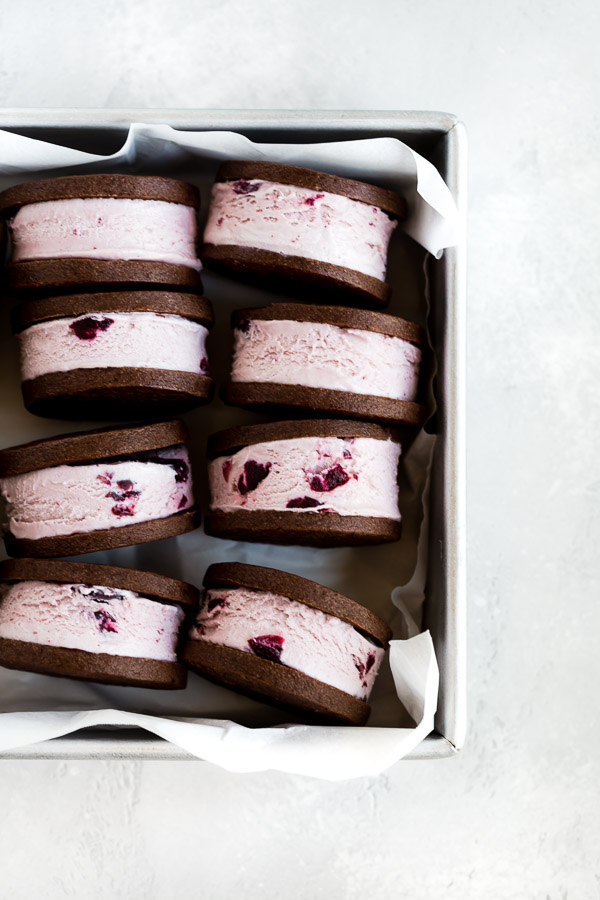 You can certainly make a seriously tasty dark cherry ice cream sandwiches using store bought ice cream, but I highly recommend dusting off the ice cream maker for this one! I use this Gelateria Ice Cream Maker from Cuisinart. Not sponsored, just a fan. I’ve been churning up delicious ice cream from scratch in this mixer all summer long and it’s proved to be worth every single penny. 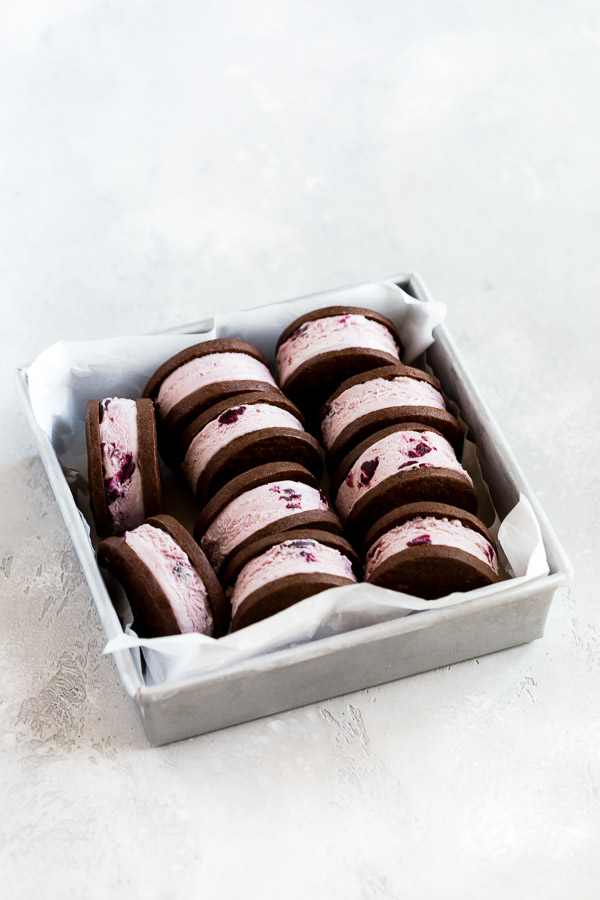 You’ve got some cold treats to whip up so let me spill a few tips and tricks before you get started. First, make the homemade ice cream ahead of time and allow plenty of time for it to freeze completely. To make these perfectly rounded discs of ice cream, simply spread a thick layer of softened ice cream into a 9 x 13 inch cake pan and refreeze. Once frozen, use a biscuit cutter or cookie cutter the same size as your cookies to cut the circles of ice cream out. Place ice cream between two cookies, press together gently and freeze for at least two hours.
If you can’t wait that long to dig in, just have a napkin or two ready because it will be messy. But isn’t a messy, cherry ice cream filled sandwich exactly what summertime needs? I say heck yes!! 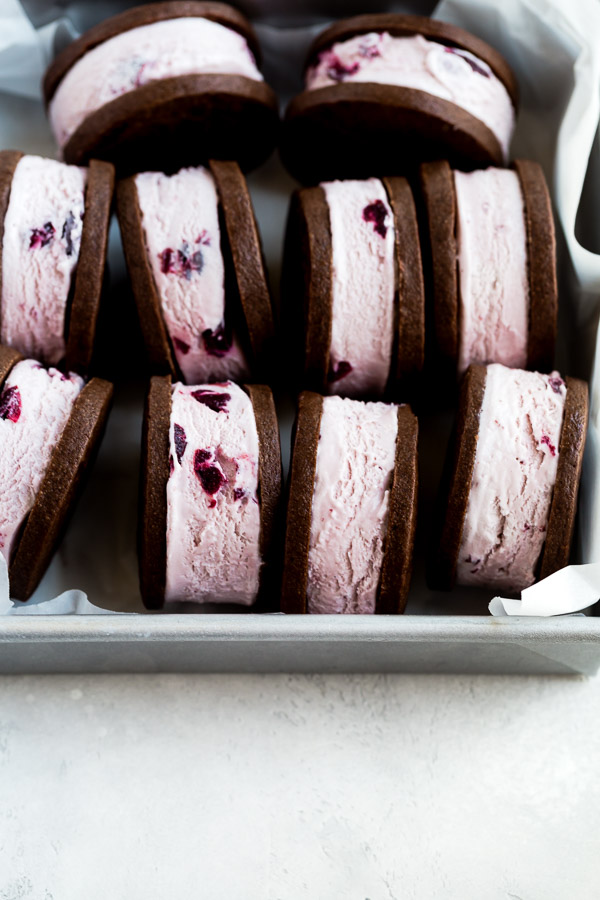 I hope you make these Dark Cherry Ice Cream Sandwiches soon, and if you do, be sure to tag @brownedbutterblondie on Instagram. I love to see what you are creating in your kitchens! I’ve got one more epic frozen ice cream treat coming at you later this week….stay tuned!